Menu
Home > news > That would be a surprise: News about the sports car of Maserati 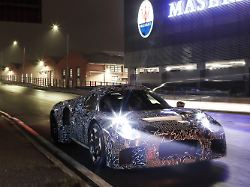 For some time, Maserati has been releasing information about a new sports car. The last news was surprising. It would mean that Maserati dare something that was last found in the Italians in the 70s.
For quite some time Maserati announced again and again, 2020 want to bring a new sports car. Now another puzzle piece has been added with some Erlkönig images. So far, it has mostly been suggested that the new model traded as a successor to the Gran Turismo would correspond to the concept introduced in 2014, Alfieri; but the photos show a completely different car. The last mid-engined sports car Maserati built in the 70s. (Photo: Maserati) Instead of an elegant front mid-engined sports coupe with a correspondingly long muzzle and 2 + 2-seater cabin, as in the case of the Alfieri, the images show a mid-engine flounder with only two seats. Accordingly, the drive is not in the front, but behind the passengers. The vehicle is similar to the 4C set by the sister company Alfa Romeo some time ago.Zuletzt's in the 70sEach model such as a new Maserati would be a real surprise, especially in the history of the company mid-engine sports cars are rather rare value. In the 1970s, the models Merak and Bora were based on this basic form. In the noughties, there was another mid-engine athlete for a short time with MC12. Whether the camouflage clad Erlkönig now shows the new sports car model, or whether it is only a vehicle for testing new drive technology, Maserati leaves open. The engine for the new sports car, it should, according to Maserati to a wholly new, exclusively for the Brand developed aggregate act. It will serve as the basis for an entire family of engines, whose variants will drive a number of other new Maserati. Maserati has already officially announced several times for a convertible version of the new sports car in 2021, as well as alternative drive concepts which, in addition to hybrid versions, also provide for battery-electric derivatives. More details should follow at the latest to the announced in May 2020 premiere of the new sports car.