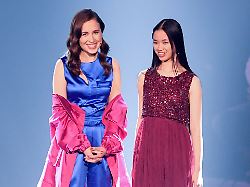 Sido has done well, Conchita distributes hand-kissed and a small Indonesian woman trällert all participants in the ground. Welcome to the pompously staged finale of the ninth "The Voice of Germany" season!
It took just eight weeks to turn edgy hobby musicians into polished pop star contenders. Yes, it was actually only two months ago when all of Germany was sitting in front of the screen and enjoyed unfiltered "blind auditions" again. "The Voice of Germany" has once again packed them all: the karaoke nerds, the under-the-shower world stars and of course the local music police. Everyone has cleaned outHere and today for the finale, all have dressed up properly. At home in a Sunday jogging suit, the Prime Time Houte Cuture is presented in the Berlin TV studio. Format accompanist Lena Gehrke appears in the glittering stiletto trouser suit. Sido comes around the corner in a fine Champions League suit. Rea Garvey has his hair open. And Mark Forster greets the jungle book look. With so many eye-catchers, even the extra Conchita Wurst, who has traveled in the black-and-yellow ostrich fondle, rubs her eyes. The evening definitely makes a splash after only a few minutes. But what does it sound like musically? Do all the unknown candidates have the ability to step into the footsteps of their final sponsors today (Freya Ridings, Dermot Kennedy, James Arthur, Max Raabe, Dua Lipa)? The fact is: everyone is at the bottom of their game and leaves many established high-profile business players speechless in the shadow after the duet appearance. Lucas Rieger celebrates arm in arm with Max Raabe's swarm of girls Erwin Kintop impresses island troubadour Dermot Kennedy with a sophisticated singer / songwriter flair. Bleach Face Lucas Rieger celebrates arm in arm with his idol Max Raabe. Ballad-expert Freschta Akbarzada swings the dancing pig with "click" billionaire Dua Lipa. And cello-Bambi Fidi Steinbeck draws a cuddly "Yeah, Fidi is he real deal!" From the British "X-Factor" -champ James Arthur. No one is behind, nobody is offside, and yet it is clear who is here relatively early Tonight probably with the widest grin on the face in the direction of after show party will be adopted. But Claudia Emmanuela Santoso is also a force. No matter what pitch the gentle Indonesian woman makes her voice heard: hands clap everywhere and tears flow. Even island star Freya Ridings is blown away by her "totally amazing" singing partner.Girl Power at it's best! After three hours would-be drama, a narcotic "Nümmerchen" marathon by the two presenters Lena Gehrke and Thore Schölermann, as well as 300 felt Finally, Claudia's coach and mentor, Alice Merton, breaks both fists in the air. Your protege has actually made it. Claudia Emmanuela Santoso is "The Voice of Germany 2019" – and after nine seasons Alice Merton actually the first female jury "winner". Girl Power at it's best. Hats off!