Menu
Home > news > Thefts in the Bundeswehr: Ammunition and equipment stolen from barracks 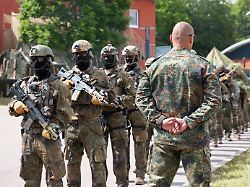 Since 2011, high-quality equipment and ammunition have disappeared in three different Bundeswehr barracks. The Federal Ministry of the Interior rates the incidents as thefts. The perpetrators are feared that they come from the right spectrum.
The Bundeswehr apparently has long fingers in its own ranks. Since 2011, equipment and ammunition have disappeared in three Bundeswehr barracks, as evidenced by a reply from the Federal Ministry of the Interior to a request from the Left Bundestag faction, which is available to the Editorial Network Germany (RND). In the Staufer barracks in Pfullendorf in Baden-Wuerttemberg two laser light modules, a signal pistol, a radio, an emergency radio and a magazine with five rounds of ammunition were stolen between 2011 and 2013. In August 2013, a total of 60 rounds of ammunition were stolen from the Bavarian Franz Josef Strauss barracks in Altenstadt. A night vision device was stolen from the Graf Zeppelin barracks in Calw, Baden-Wuerttemberg, the location of the Special Forces Command (KSK). The night vision device for the special unit was stolen on April 27, 2017, according to Federal Interior Secretary Hans-Georg Engelke on which the terrorist suspected Federal Army officer Franco A. was arrested. The Federal Prosecutor's Office assumes that the lieutenant has tried to commit a terrorist attack and to blame these refugees.Righting networks as masterminds Tobias Pflüger, defense policy spokesman for the Left Bundestag faction, fears that the ammunition and other equipment may have disappeared stolen by neo-Nazis in the Bundeswehr. Especially after ammunition, night vision devices and radios there is a high demand in right-wing networks. "Franco A. planned to intercept the police radio, the people responsible for the thefts have to be located as quickly as possible and we urgently need a complete investigation of right-wing networks in the security authorities" Tiller the RND. The Altenstadt and Pfullendorf sites have also been negatively affected by right-wing extremist incidents in the past.