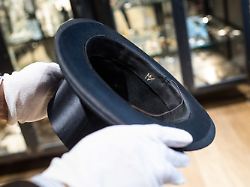 A Lebanese businessman acquires Nazi objects worth over half a million euros at auction. The objects he now wants to donate to an Israeli foundation, so they are not abused for right propaganda purposes.
The hat sold by Adolf Hitler in Munich comes into the hands of an Israeli foundation. Lebanese businessman Abdallah Chatila, who lives in Switzerland, told the newspaper "Le Matin Dimanche" that he had bought the hat and other objects associated with Hitler so that they would not be abused for "neo-Nazi propaganda". He had contacted the Keren Hajessod Foundation and decided to send them the items. They will be exhibited in a museum in the future. The controversial auction was held in Munich by the auction house Hermann Historica. Chatila acquired a total of ten items for 545,000 euros. In addition to the Nazi dictator's hat are also Hitler's cigar box and typewriter, as well as a luxury edition of "Mein Kampf", which belonged to the Nazi-size Hermann Goering. The President of the European Jewish Association (EJA), Menachem Margolin, showed himself " overwhelmed "from the step of the businessman. At the same time he called on the federal government to control the auctioning of Nazi items more. Auction houses should therefore disclose who buys the objects so that the buyers could be monitored.