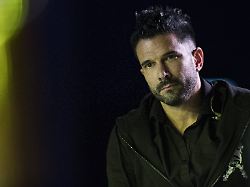 He was the husband of Sarah Connor. He was a member of Boyband Natural. He was jungle king. And he was a drunk. Marc Terenzi speaks openly and honestly about his alcohol past and about how he started "from scratch" again. By now he is dry – almost.
It just seems to be the time of alcohol denial. Just now Jenny Elvers has spoken again about the time in which she was so attached to the bottle that it was about her life and death. And Peer Kusmagk also talked about his excessive alcohol consumption, which allowed him to take control of his life. What connects Elvers and Kusmagk independently of each other? They were both already guests in the jungle camp. Kusmagk took the jungle crown in 2011, Elvers took ninth place five years later. And Marc Terenzi also has a past on the RTL show, where he became Jungle King in 2016. Is the show business to blame, but that's just a coincidence on the sidelines. More weight has now Terenzi also unpacks over his former difficulties with the devil alcohol. He used to pour up to two bottles of vodka a day, the 41-year-old admits in conversation with the portal "Promiflash". At least, he blames the show business. "Alcohol and drugs play a big role in my life, you get to a point where you just work, you have to do a show, you have to be happy, you're tired and you are a year on tour ", the musician is quoted. To survive the day and to feel "normal", you finally reach for intoxicants. You can not expect help from the environment in the music industry, Terenzi is sure. "They take you to the next show, you make money, and when you die, they take the next artist." Looking at the rock star image, it was cool rather than embarrassing to fall drunk down stairs. One year off to escape the vicious circle, he finally took a break for a year. "I started from scratch, I have not been drinking for a year," says Terenzi in the "Promiflash" interview. There had been "a few relapses" in time, "but it's not as bad as it used to be." Marc Terenzi became known as a member of Boyband Natural. From 2004 to 2010 he was married to Sarah Connor, with whom he has two children. Later he got another child with the Playmate Myriel Brechtel. Unlike his ex-wife, his music career stalled. Today, he makes headlines especially as a member of a stripper troupe. Or with a new love: So he presented only at the beginning of the week his new girlfriend, the stylist Viviane Ehret-Kleinau.