Menu
Home > news > Up to 1.5 million subscribers: the facts on the basic pension 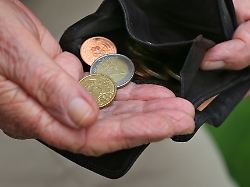 Agreement after months of coalition dispute: Hundreds of thousands of small pensions will receive a basic pension from 2021 onwards. Between 1.2 and 1.5 million people should receive the pension supplement. In addition, investments in digitization and climate protection should be promoted more strongly. What is the income test? In the coalition agreement was stated that people from 35 contribution years with the supplement after a means test should be ten percent above the basic insurance. The compromise deviates from this: a comprehensive income test should take place. This should apply to a tax allowance. The basic pension is to be paid up to an income plus pension and investment income of 1250 euros for single persons and 1950 euros for couples. The income test should be made "automated and citizen-friendly" by an exchange of data between pension insurance and tax offices.For whom is the surcharge? The winner is those who have 35 years with contributions from work, care or education, but has earned little. It was important to the SPD that as many people as possible supplement their low compensation with the basic pension. The key thing for the Union was that it should not be distributed by the watering-can principle. Minister of Labor Hubertus Heil had originally presented a concept according to which the project should cost up to 4.8 billion euros and benefit three million people. According to CSU boss Markus Söder, the costs should now be between 1 and 1.5 billion euros.How to finance the basic pension? This is to be financed exclusively from tax revenue – for example through the planned financial transaction tax. The basic pension increases the salary points. The pension is calculated using the earnings points – an average earner earns one point per year. For every point, there is currently 33.05 euros pension in the west and 31.89 euros in the east. If the salary points on the average of the 35 years are only between 0.4 and 0.8, these are now increased with the basic pension to a maximum of 0.8.How does the calculation of the allowance amount? 35 years of contributions receive a deduction for the pension of 100 euros plus 30 percent of the overlying pension rights up to a certain limit. In addition to the basic pension, the Coalition also wants to introduce an allowance for housing subsidies in the amount of about 80 million euros: The improvement in the pension should not be eroded by a reduction in housing. What effects has the basic pension on unemployment insurance? The package also includes a temporary Reduction of the contribution to the unemployment insurance: It is to fall temporarily by the end of 2022 from 2.5 to 2.4 percent. But it had already been decided that he would rise to 2.6 percent thereafter. Improvements in occupational pensions are also foreseen. For low-income earners with a monthly income up to 2200 euros gross, the funding amount of a maximum of 144 euros to 288 euros will be doubled.Und on the health insurance contributions? Retirement pensions are to be relieved also in the amount of 1.2 billion euros in health insurance contributions. In order to increase the attractiveness of employee share ownership in asset accumulation, the Union and the SPD also want to increase the tax-exempt amount in this area from EUR 360 to EUR 720. To stimulate investment, the Kreditanstalt für Wiederaufbau plans to set up an investment fund for future technologies of up to € 10 billion, particularly in the areas of digitization and climate technologies.