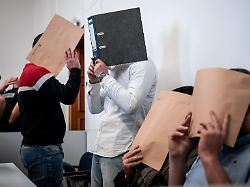 Five young men approach women in front of Düsseldorf clubs, lure them into an apartment, rape them – and record the deeds with their cell phones. Now the men are in court. They are accused of joint rape and dangerous assault.
They are said to have made women defenseless and then raped and sexually assaulted them – in front of the Kleve district court, the trial of five young men has begun. According to the indictment, the 24 to 29-year-old defendant allegedly poured women 's drops into the glass, a drug that makes those affected unconscious or incapacitated. Previously, they should have addressed their victims in or in front of nightclubs in the old town of Dusseldorf and then lured into the apartment of an accused in Krefeld. There they were supposed to have raped the women – and made videos with their cell phones. The prosecution believes that the maltreatment lasted up to five hours in one case. The three Germans and two Turks are being charged with joint rape, dangerous bodily harm and personal injury. In one of the group rapes, four of the accused were involved, in the other three. Two accused are also accused of attempted joint rape of another young woman. All acts are said to have occurred in February and March. The trial of the Foreign Criminal Division began for lack of space in the district court Neuss. The two victims are co-plaintiffs in the proceedings.