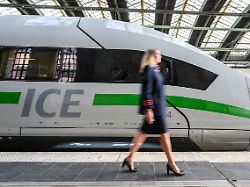 No company is as much in the criticism as the German railway. But according to CEO Lutz is now working intensively on the image improvement. This concerns above all the personnel policy and the maintenance.
Deutsche Bahn wants to create a thousand new jobs in long-distance traffic in the coming year, so that the ICE trains are more punctual and cleaner. This will make the "growing long-haul fleet even more reliable and the service better," said railway chief Richard Lutz of "Bild am Sonntag". "New technicians and more on-board staff will ensure that the trains are cleaner, more regular and more punctual," said Lutz. In addition, more than 2000 new train drivers were hired and trained this year. "That's an increase of 25 percent over the previous year and will stabilize the timetables," said the railway chief. All told, the railway wants to hire 24,000 new employees this year. According to Richard Lutz, the track should be much better. (Photo: imago images / Reiner Zensen) The railway boss does not see any problems in finding suitable employees: "Especially young people like coming to us," Lutz told the newspaper. "The Greta generation likes what we do, they want to work in a company that is green and therefore makes an important contribution to society." The Railway and Transport Workers' Union (ECG) called on the railway to do better for the rising passenger numbers through the planned VAT cut in long-distance traffic. "The Bahn expects that by lowering the VAT up to five million passengers per year will be added," said the new chairman of the TOG Torsten Westphal the newspapers of the editorial network Germany. "I question whether the right arrangements have been made to cope with this." Biggest Growth Program in Railway History "More people in trains, even more stress for our colleagues, who get all the frustration when the capacity does not exist are – that can not make sense, "said Westphal. Although its union has been demanding VAT cuts for a long time, it also needs to purchase significantly more ICE trains and intercity, increase infrastructure capacity and hire enough staff. Otherwise trains would not be able to start due to overcrowding. The people are ready to switch to the train. However, there was "the great danger that the mood will eventually overturn." The recently adopted by the federal government climate package provides to reduce the VAT on long-distance rail tickets from 2020 to seven percent, in local traffic, the reduced rate already applies.According to CEO Lutz wants to set the train now on the biggest growth program in the more than 180-year history of the railway. In the next decade, Deutsche Bahn will be investing billions in the billions for new trains, more personnel and, above all, a better and larger infrastructure. At the same time he announced lower profits for the state-owned company: "In return, we will accept significantly lower profits in the coming years, but at the same time keep our debt stable."