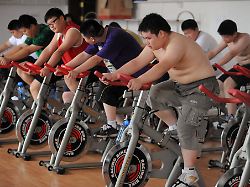 The World Health Organization recommends that you exercise physically for at least one hour each day. However, over 80 percent of all young people worldwide do not do this, according to a study. One reason is the digital revolution.
Four out of five young people worldwide are not doing enough. The World Health Organization (WHO) comes to this conclusion in a report in which it first examined the lack of movement of adolescents worldwide. In particular, girls were not sufficiently physically active, the organization warned. The report, published in the journal Lancet Child & Adolescent Health, is based on survey data from 2001 to 2016, with 1.6 million students between the ages of eleven and 17 Surprisingly, 81 percent of respondents did not meet the WHO recommendation to work at least one hour a day. There are hardly any differences between the individual regions and countries. "In many, many countries, between 80 and 90 percent of adolescents fail to comply with the recommendations for physical activity," said lead author Regina Guthold. The quota ranges from 66 percent in Bangladesh up to 94 percent in South Korea. Cultural pressure forces girls to the stove Especially little girls move accordingly: Only 15 percent reach the recommended level of physical activity, the boys are 22 percent. In some countries, according to the experts, this seems to be due to the cultural pressure that girls are under. They are expected to stay at home and avoid exercise. In addition, safety concerns in out-of-home activities play a role. The reasons for the lack of exercise among youth have not been explored in the report. However, Leanne Riley, co-author of the study, said the digital revolution "seems to have changed the way teenagers move." Today's young people "sit more and are less active". "We absolutely must do more," she demanded. Otherwise, threaten a "very bleak health picture" of the youth.