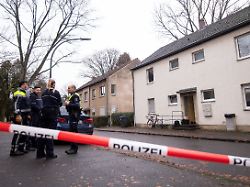 When two employees of the city of Cologne ring the doorbell, a 60-year-old reaches for the knife and one of the officials dies. Now it becomes known that the attacker is obviously mentally ill. Because of a similar attack, he was already in psychiatry.
According to the police, the suspect in the event of a fatal knife attack on a city employee in Cologne is probably not responsible. The apparently mentally ill man stabbed an employee of the city of Cologne when he wanted to collect open claims from the city. The 47-year-old city treasurer died at the scene, his 57-year-old colleague was shocked to the hospital, the police said. The attacker allegedly attacked a city worker with a screwdriver in March, and the police say the 60-year-old attacker is clearly showing signs of a serious mental illness. He is said to have been incapacitated at the time of the attack. The public prosecutor will therefore apply to the Cologne District Court on Saturday to place the accused in a psychiatric hospital. According to the police, the two employees of the combing office came to the apartment building in Cologne's Dünnwald district because of the open claims for money. The 60-year-old is said to have attacked the employees with a knife and fatally injured the 47-year-old. His colleague was not physically injured, but suffered a severe shock. The police set up a homicide commission to clarify the course of the crime. The attacker was already in psychiatry. In March, the 60-year-old had attacked a city worker with a screwdriver, who got away with minor injuries, the police said. As a spokesman for the prosecutor said, the man had been hospitalized after the attack. The speaker was initially unable to say how long he was there and why he was released. The circumstances of his placement and release would be examined. An investigation is also underway in this matter, and both proceedings are expected to be merged.The Cologne Mayor Henriette Reker, who was the victim of a knife attack four years ago, expressed her condolences to the colleagues in the enforcement department of the combing department. "The fact that one of our colleagues who died in an attack on our city lost his life deeply affects me and fills me with great sadness," she said. The brutalization of society no longer seems to know any borders. "As a city, we will do everything we can to make our employees feel even safer," said Reker. However, there will never be absolute security.