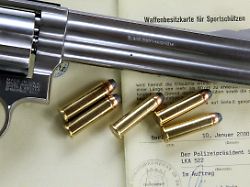 After tough debates, the Bundestag resolves a tightening of weapons legislation. It is said to make it more difficult for extremists to legally obtain weapons and ammunition. The opposition parties criticize the new regulations – for different reasons.
The Bundestag has tightened its arms law following heated debate between government politicians and the opposition. A law passed with the votes of the Union and the SPD provides for the extension of the national register of weapons in order to facilitate the traceability of all firearms. In addition, new reporting requirements for arms manufacturers and traders are introduced. In addition, the size of magazines is limited to certain firearms to make their use for terrorist attacks more difficult. A rule review of weapons owners by the constitutional protection before granting a weapons permit is to ensure that extremists have no legal access to weapons. Hunters, gunners and weapon collectors had mobilized against the original draft of the Federal Ministry of the Interior. Among other things, he provided that shooters should regularly prove for each weapon that they actually use them. The bill, which is to implement an EU directive, has been weakened after the protests in some points. Hunters and marksmen, once they have received permission to hold firearms for the first time, will have to prove that their "needs" persist at five and ten years later. Then it is sufficient to prove that the shooter is a member of a shooting sports club. FDP and AfD voted against the law on Friday. Green and left abstained.Problemlos from the Schreckschusswaffe to sharp weaponThe SPD politician Helge Lindh recalled the Islamist attacks in Paris in 2015, the Berlin assassin Anis Amri and the attack on the synagogue in Halle. "It is a necessity for us to have and enforce a strict, sharp arms law in this country," he said. However, the perpetrators had illegally procured their weapons during the said attacks or even built themselves. Andrea Lindholz of the CDU said that around two million legal gun owners should not be put under general suspicion. She also pointed to attacks. "Alarm weapons from Eastern Europe could easily be retooled into sharp weapons, so the EU had to act urgently and reform the Firearms Directive, because Europe needs common and reliable standards in dealing with weapons," she said not achieved because they did not abide by laws, said the AfD deputy Martin Hess. The law is "political actionism" without security gain. "The ban on magazines of a certain capacity, according to the consensus of all relevant experts no more security," he criticized. Magazine for the cartridges are – unlike sharp weapons and their essential parts – freely available and readily available. There are more hunting license holders "Who is engaged in extremist clubs, who must not have access to firearms," ​​said the FDP politician Konstantin Kuhle. But now there is a general suspicion against legal gun owners. He also doubted the effectiveness of gun bans. "It's already possible to ban weapons in schools," he said. Greens and leftists expressed doubts that the measures take effect. "There are still more than 700 known neo-Nazis in possession of weapons," said Left MEP Martina Renner. The problem is that the authorities did not act. A rule request to the constitutional protection was neither necessary, nor does it make the society safer. Even Irene Mihalic of the Greens doubted the effectiveness of the law. In Germany there were more than 384,000 holders of a hunting license in 2018. The number has been steadily increasing in recent years. The German Schützenbund counted last year about 1.35 million members. Weapon possession cards also have weapon collectors and weapons experts. There is also a permit for the arms trade. Only a few people have a so-called firearm license, with which a sharp firearm in the public can be led.