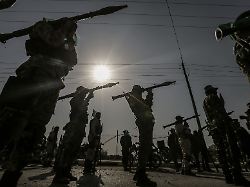 Since mid-November, there has been a fire break in Gaza. But the ceasefire is fragile: after attacks by militant Palestinians, the Israeli Air Force becomes active.
Israel has responded with air strikes in the Gaza Strip on the new rocket attacks from the Palestinian territory. Israeli aircraft attacked targets of the Al-Qassam Brigades, the armed wing of the Palestinian organization Hamas, on Sunday morning, Hamas officials said. There have been no reports of any injuries or damage. Previously, Palestinians militants fired from the Gaza Strip three times into Israeli territory for the first time on a late Saturday night. The three projectiles were intercepted by the Israeli missile defense system, as the Israeli army announced. Initially, only two rockets had been intercepted. According to paramedics, three people in the town of Sderot were slightly injured as they sought refuge in shelters. By the end of November, radical Palestinians had fired on Israeli territory from the Gaza Strip. In November, after the killing of a senior commander of the Islamic Jihad organization in Gaza, the situation escalated by Israeli forces. Islamic jihad and Gaza-ruling Hamas announced retaliation, and within two days about 450 rockets landed in Israeli territory. Israeli counter-attacks have killed 36 Palestinians. Since November 14, there has been a ceasefire brokered by Egypt and the UN, which is extremely fragile.