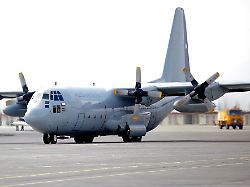 On the way to the Antarctic radio contact with a Chilean military machine breaks off. Later rescue workers find wreckage in the sea. Meanwhile, the authorities have given up the hope to recover one of the 38 inmates alive.
After the disappearance of a Chilean military machine with 38 people on board, the Air Force has confirmed the crash of the machine and left no hope for survivors. It was "virtually impossible that there are survivors of this plane crash," said Air Force chief Arturo Merino in southern Chilean Punta Arenas. The machine of the type Hercules C-130 was missing on Monday on the way to the Antarctic. The last radio contact existed when the aircraft was at the height of the extremely stormy Drake Strait between Cape Horn and the Antarctic. No emergency call had been received, said a Luftwaffe spokesman. Around 30 kilometers south of the place where radio contact with the plane had last existed, in the sea, among other things, a spare wheel, parts of the interior lining, a part of the tank system and a shoe and a backpack was found, the armed forces said. On board the machine were 17 crew members and 21 passengers. The C-130, built in 1978 by Lockheed Martin, had been sold by the US Marine Corps to the Chilean Air Force in 2012. The machine was used to transport personnel to service the floating pipeline of the Chilean Antarctic Base. On board next to Air Force personnel were three army officers, one of them a general, and three civilians. The Chilean base Presidente Frei on the King George Island of the South Shetland Antarctic archipelago was inaugurated in 2014 and can accommodate up to 150 people. The base also receives tourists in the southern summer.