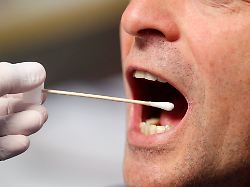 Twenty-three years ago, eleven-year-old Claudia Ruf was raped and murdered. New findings suggest that the culprit lives unrecognized nearby. A DNA mass test is in full swing and is intended to expose the child murderer. Because even men who do not participate, get a visit from the police.
In the first phase of the mass genetic test in the Claudia Ruf murder case, around 95 percent of the men in question gave a saliva sample. 945 men volunteered for the test by evening. The Bonn police chief Ursula Brohl-Sowa spoke in Grevenbroich of an overwhelming result. First, the homicide commission had asked 800 men for a saliva sample locally in Grevenbroich-Hemmerden, but then expanded the circle in the short term to around 1,000 men. The then eleven-year-old Claudia Ruf was kidnapped and sexually abused in 1996 in her hometown Hemmerden. Her body was found 70 kilometers away on a dirt road in Euskirchen near Bonn. The search for the murderer had recently been reopened because Profiler had discovered new approaches to the case. One now knows why the body of the child was deposited 70 kilometers away at Euskirchen on a dirt road, the investigators said in mid-November – could this but for determination tactical reasons not betrayed. According to a new assessment, profilers of the state criminal investigation department now also go from a perpetrator, who probably lived in the Grevenbroicher district Hemmerden or had a strong relationship there. In addition, there are new scientific findings on perpetrator DNA.5000 Euro reward and over 100 notes In a second phase, another 900 men are to be contacted, who have moved away from there since the murder 23 years ago. Results are expected in two to three months. Police and prosecutors have suspended 5000 euro reward for clues. Over 100 indications from the population had been received in the past two weeks. "A hot tip was not there," said a police spokesman. Claudia was eleven when she disappeared. (Photo: picture alliance / dpa) Last weekend, 675 men followed the appeal. In total, in the meantime 1900 instead of 1600 planned as initially planned deliver a saliva sample. In parallel to the on-site tests, the police have begun to write to police departments nationwide and ask for samples of the men who no longer live in Grevenbroich. It is already the third and largest DNA mass test to date in the murder case. The investigators are also counting on the fact that the DNA labs since 2017 also at so-called near-hits may sound the alarm, so if a close relative of the offender has given a sample. The men who have not appeared despite invitation to the dates in elementary school , are now targeted. Some men who fit in the grid have already died, said homicide chief Reinhold Jordan. In these cases, their relatives would now be visited.