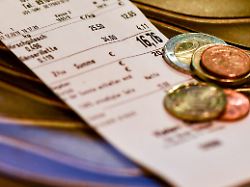 Economics Minister Altmaier is not very happy that he gets a receipt for every roll at the bakery. Although the obligation to provide evidence comes into force in January, doubts about the meaningfulness do not subside. However, the Ministry of Finance does not want to make any improvements.
Despite the criticism from Federal Minister of Economics Peter Altmaier and environmental associations, retailers and consumers have to be prepared for the obligation to pay at the beginning of the year. "It remains that this obligation to provide evidence will come into force on January 1," said a spokesman for the Federal Ministry of Finance in Berlin. The trade had had more than three years to prepare. Government spokesman Steffen Seibert said: "This law is justified." With the Cash Act passed in 2016, the government wants to combat tax fraud through manipulated cash registers. Altmaier is pushing for changes so that receipts do not always have to be issued. A spokesman for the business department emphasized that no regulation and no parliamentary procedure was necessary. "There is the possibility of making this legally legal." Altmaier said in the ZDF "Morgenmagazin": "When I buy a roll, I don't look on the receipt to see if there is any fraud." He usually leaves the receipt, like 90 percent of the citizens. The minister originally assumed that an existing exception rule would apply to anonymous bulk business such as the bakery, the spokesman for the business department said. However, an application regulation was very restrictive, he said with regard to the finance department. BUND: Mountains of garbage from thermal paper criticism of the new receipt obligation also came from the Federation for Environment and Nature Conservation (BUND). "The sales receipt obligation mainly produces piles of rubbish from non-recyclable and health-problematic sales receipts made from thermal paper," said BUND waste expert Rolf Buschmann. Altmaier had also expressed this concern. In addition, criminal energy could not be prevented with a receipt, the BUND expert further complained. "If you want to cheat, you can do it despite the new receipt requirement." A spokesman for the environment ministry tried to dispel at least the reservations against thermal paper. There is also environmentally friendly "color developer-free paper". In addition, disposable packaging is a much bigger environmental problem in retail, and the FDP has submitted an amendment law. "Nobody wants a receipt requirement to be introduced from next year, we all agree now. No matter whether large supermarket chain or the bakery next door, every company has to be prepared for a mad bureaucratic effort," said Christian Dürr, FDP Vice-leader in the Bundestag.