Menu
Home > news > At least 15 dead in case of misfortune: Coach crashes in Siberia from bridge 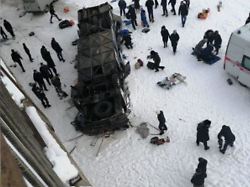 On a bridge in Siberia, a coach comes off the road and falls six meters into the depths on a frozen river. Many people are killed, including children. A defect could have played a role in the accident.
A bus accident in Siberia killed at least 15 people. Presumably because of a ruptured tire, the driver in the afternoon (local time) lost control of the coach near the city Sretensk east of Lake Baikal, authorities said. Thereupon the vehicle with more than 40 passengers on board broke a barrier and fell about 6 meters from a bridge onto a frozen river. On pictures you could see the badly damaged bus lying on the roof on the ice. Another 18 people were injured, some of them seriously. Among the victims, according to media reports, are also children. Details were initially unknown. The authorities have started investigations into the cause of the accident.