Menu
Home > news > Away from the cheap image: Burger King wants to become a premium chain 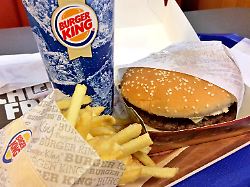 The restaurant chain Burger King is changing course. Instead of cheap fast food, the US group now wants to tap new target groups with higher-value products. Many branches are being rebuilt for the new image.
The US fast food chain Burger King wants to get away from the cheap corner. After the modernization of many stores with a new, sleeker design, the previously meat-laden menu has now been spiced up. "We are increasingly relying on our high-quality products in our strategy," said Germany boss Carlos Baron in Munich. "The core of our brand is the open-fire grilled burgers we want to stay true to, but we also want to reach out to new target groups." The modernization of the restaurants pay off, said the manager. "In the redesigned restaurants, we have about ten percent more revenue, guests stay longer because they feel comfortable in a more comfortable environment, and order higher quality premium products." The company "no longer just wants to be a brand for burgers and beef "Baron said. "Both must be in balance." Meanwhile, a vegetable whoppers and more salads and wraps are on the menu. Burger King has been expanding worldwide for a number of years to narrow the gap with McDonald's. "We're opening around 1000 new restaurants a year worldwide," said Baron. "Europe is developing strongly, in Germany we are successfully expanding." According to his German boss, the chain mainly works together with large franchisees, such as at stations with Station Food GmbH, in which Deutsche Bahn and its subsidiary Station & Service AG are involved. "In cooperation with Echo, we will be opening 130 restaurants in Esso gas stations over the next five years, the first of which will soon be in Frankfurt," said Baron. Restaurant Brands (Burger King) 59.50 A total of 250 new branches are planned in Germany, currently there are about 750. "In order to reach the number of 1000 restaurants in Germany, we have to open another 120 restaurants in addition to the cooperation with Echo "Baron said. "That's about 30 per year." Although the expansion is mainly to be done with larger franchisees, Burger King does not want to lose the small restaurateurs. "Some only run a restaurant and do an excellent job," said Baron. "A contract runs for over 20 years, it's like a marriage, which requires trust on both sides." *Privacy