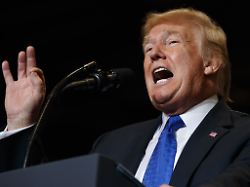 It is still not clear whether Michael Bloomberg may challenge Donald Trump in the presidential election of 2020. Nevertheless, Trump already pulls vigorously against the billionaire and media entrepreneur from the leather.
US President Donald Trump has continued his premature "election campaign" against Democratic presidential candidate Michael Bloomberg with new attacks. "Mini Mike Bloomberg has instructed his third-rate news organization not to investigate him or any other Democrat, but only to prosecute President Trump," tweeted the president. "The failing New York Times thinks this is OK, because their hatred and prejudice are so great that they can not look straight ahead, and that's not OK!" The campaign team Trumps accuses the media group Bloombergs partisanship. The team said they would no longer issue accreditations to Bloomberg News representatives for Trump's campaign appearances and other events. Whether and how the team handles requests from the media corporation or individual reporters will be decided on a case-by-case basis. The reason given was that the media company had publicly stated that they were not impartial. A few days ago, Mr. Loomberg had officially announced that he would step into his party 's presidential race and challenge Trump in the 2020 election. The 77-year-old is the founder of the named after him financial and media company and is considered one of the richest men in the world. His fortune should amount to more than 55 billion dollars.