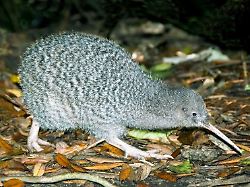 The New Zealanders are very proud of their kiwis. But at some point you will have to choose between your national bird and your favorite pet. Cats love kiwis – and New Zealand wants to be "predator free" by 2050.
For the kiwi, New Zealand's national bird, the island of Kapiti must be fairly close to paradise. The last rat died here in 1996 on a poisonous bait. The last opossum was shot in 1986. The last cat died in 1935. On the small island off the capital Wellington, the kiwi has had no natural enemies for almost a quarter of a century. 1400 specimens now live on Kapiti. Once there were 5. The island is now to become a model for the whole country. The plan is to make the state with its unique bird life "predator free" by 2050. Literally translated: free from predators. The campaign is designed to ensure that bird killers such as rats or ermines no longer exist in the entire country. No mammals existed in New Zealand before the arrival of humans, apart from bats and seals. Therefore, the birds did not have to adjust to these enemies, some cannot fly at all. But what happens to pets for whom birds are also not taboo? Above all: what happens to domestic cats? There are 1.4 million of them in New Zealand – a country with less than 5 million inhabitants. For comparison: of kiwis, there are only 68,000 of the millions that used to exist. And then the "Agenda 2050" is also about a number of other native bird species that are also highly endangered or threatened with extinction. Flightless and almost blind, but of course the kiwi is the star. Most New Zealanders – who like to call themselves "kiwis" – have never seen one in the wild. This is also due to the fact that he is a rather weird bird: unable to fly, practically blind and only active at night. He prefers to spend the day in self-dug caves. Manaaki Barrett takes tourists to the kiwi's whereabouts. (Photo: Christoph Sator / dpa) There is a whole system of hiding places on Kapiti. Manaaki Barrett goes there with tourists when it gets dark. "You see 75 percent of them," he says. Hardly anyone can get a decent photo. Flash is strictly prohibited. The already very shy kiwis then go completely crazy, Lee Barry is one of two government rangers on the island. Her job also includes checking hundreds of traps – only for the possibility that a bird killer will somehow get to the island again. So far, they have largely been spared this on Kapiti. Only a few years ago, a single marten got there. He was brought down. Program as ambitious as "landing on the moon for the Americans" Two traps on the side of the road in Wellington's Miramar district. To protect birds, all rats and martens are said to have disappeared there by the end of this year. (Photo: Christoph Sator / dpa) In the meantime, the population is so large that dozen kiwis are shipped from here to other nature reserves. And what does the ranger think about the chances of success of the nationwide program? "Extremely ambitious," says the 44-year-old. "For us, that's what the moon landing was for the Americans." It is still almost exclusively about fighting rats and martens. "But at some point," says Barry, "we will probably have to choose between a cat and a kiwi." Overall, the kiwi population is declining slightly year after year. Most females only lay an egg once or twice a year. Only five percent of hatched chicks reach adulthood. The concern about the survival of the species is great. Donations are collected everywhere. Protection projects exist in many schools. Anyone who discovers an injured kiwi can call the environmental agency's hotline 24 hours a day, so far, Katze has not declared an enemy, trapping rats and martens on the edge of a hiking trail on the New Zealand island of Kapiti. (Photo: Christoph Sator / dpa) Unlike rats or ermines, cats have not yet been declared an enemy in the bird protection program. However, there are now guidelines for "responsible ownership of cats and other pets". This includes making the cat sterile, letting it out as little as possible, and "seriously considering whether a cat needs to be replaced when it dies". On New Zealand's South Island, a village has already declared itself a cat-free zone. But that didn't last. Today, in the capital Wellington alone there are 70 different protection groups such as "Kiwis for Kiwis" or "Capital Kiwi". Things have progressed furthest in the suburb of Miramar, where celebrities like the filmmaker Peter Jackson ("Lord of the Rings") live. 6000 traps have been set up here since July. "We hope that we caught the last rat at New Year," says Kylie Reeves of "Predator Free Wellington." As far as domestic cats are concerned, there is a pragmatic recommendation in Miramar for now: a collar with a bell.