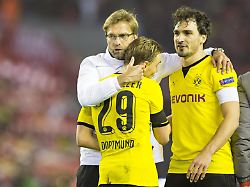 When and where is clear, only who against who, that is only on Monday. Then let the Uefa triggers the knockout stages of the football premier class. From the Bundesliga with it: the FC Bayern, Borussia Dortmund and RB Leipzig. And no, we're not writing anything about Hammerless now.
For Borussia Dortmund it could come to a rendezvous with the former coaches Jürgen Klopp or Thomas Tuchel, the FC Bayern Munich and RB Leipzig want everything – just not to Madrid. Against whom it is for the three Bundesliga football in the knockout stages of the Champions League is on Monday, when the Uefa draw off 12 clock. BVB will be pulled out of pot two as second in the group and could face defending champion Liverpool FC with Klopp or Tuchel's Paris St. Germain. Yes, what do you loose? Pot One: FC Bayern, RB Leipzig, Liverpool FC, FC Barcelona, ​​Juventus, Manchester City, Paris St. Germain, Valencia CF Pot Two: Borussia Dortmund, Real Madrid, Chelsea, Olympique Lyon, Atalanta Bergamo, SSC Naples, Tottenham Hotspur , Atletico Madrid Other options for coach Lucien Favre's team include Manchester City, Juventus Turin and Valencia CF. National duels with the Munich or the Leipzig are still excluded in the second round. The Bayern could meet as Leipzig on Real or Atletico Madrid. Chelsea, SSC Naples and Atalanta Bergamo are also possible. The Bayern could also be zusammengelost with Leipzig's group opponent Olympique Lyon, RB with the Munich preliminary round opponent Tottenham Hotspur. "There are one, two well-known opponents, but no matter who pull: If we are in good shape, then we are favorites," said Münchnes German international Joshua Kimmich.Für Sebastian Kehl, head of the licensing team of BVB, would be Valencia "certainly the easiest" opponent. Leipzig CEO Oliver Mintzlaff said: "We take it the way it comes." Oh. Either way, Leipzig and Bayern compete as group winners only abroad. The first leg in the second round, for the first time only clubs from Europe's top five leagues are qualified, on 18/19. and 25./26. February next year, the second leg on 10/11. and 17./18. March. The final will be on May 30 in Istanbul.