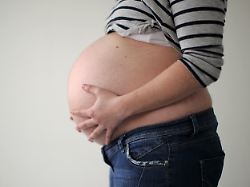 The junior decision falls increasingly later in life: More and more women in Germany get their first child in the fourth decade of life. Nearly half of the mothers of 366,000 first-borns last year were older than 30 years.
More than half of the women in Germany are 30 or older when their first child is born. Last year, 48 percent of women were between the ages of 30 and 39, according to the Federal Statistical Office. Three percent of first-time mothers were 40 or older. Even over the age of fifty, statisticians still had births. According to official data, 67 premature babies were born last year in Germany, where the mother was 50 or older. Data on the average age of the fathers at the birth of their first child are not available. Based on the total number of unusually old mothers remains negligible. In total, 790,000 children were born in Germany last year. In 366,000 cases, it was the first child for the mother. The average age at the first birth was 30 years and rose slightly. In the reference year 2017, the national average was still 29.4 years. The map shows clearly recognizable differences between the metropolitan areas and the area countries. The highest average age is found in the comparison of the 16 federal states for Hamburg, where mothers were given their first child at the age of 31.More childless womenAbout Germany, the proportion of women who willingly or unintentionally remains childless increased slightly in the period between 2008 and 2018 Although in the nationwide average of 17 to 21 percent. However, here too there are major regional differences: according to the figures, women were still far less likely to be childless in the East German flat countries than in western Germany. The trend shows a progressive alignment between East and West. The so-called final childless rate has more than doubled in the East German territorial areas between 2008 and 2018 from an average of 7 to 15 percent. In 2018, the childless rate between the ages of 45 and 49 varied between 13 percent in Thuringia and 31 percent in Hamburg. In the area countries in the west, the ratios are relatively low with values ​​between 21 percent and 22 percent. Only the federal states of Rhineland-Palatinate (25 percent) and Saarland (19 percent) are exceptions. Brandenburg has the highest rate of 16 percent in East German women. The level of education also has a major influence on the K-question: among women with academic qualifications, ie Bachelor's, Master's, diploma or doctorate degrees, the proportion of childless people falls Women are particularly tall. However, there are signs that the difficult balance between career and the desire to have children has become easier in recent years in Germany. The final rate of childless female academics fell between 2008 and 2018 from about 28 percent to 26 percent.