Menu
Home > news > Climate activist still at sea: Does Thunberg make it to Madrid in time? 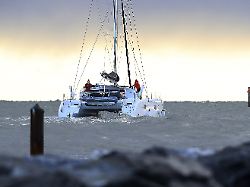 Activist Greta Thunberg is sailing across the Atlantic towards Europe to arrive in time for the major climate change conference in Madrid. But will she do it? She is still on the road, but the Swede is optimistic – and also advertises her message at sea.
Greta Thunberg is sailing full steam ahead towards Europe and is expected to reach Lisbon on Tuesday morning, before continuing to the climate conference in Madrid. Thunberg sailed to the United States on November 13 to travel to Europe in time for the rally. As on her outward journey to New York, she once again renounced flying to protect the climate. On Twitter she kept her community up to date: "We are on the way to Europe! Our estimated time of arrival in Doca de Alcantara, Lisbon, is Tuesday morning and we look forward to seeing all of you there," says Thunberg. If everything goes according to plan, she would still have enough time to travel on to the December 13 ongoing World Climate Conference in Madrid, 600 kilometers away. Thunberg usually uses trains to travel long distances. In the US and Canada, the activist campaigned for a better climate policy. Actually, she wanted to travel from the US to Chile, where the world climate conference was originally supposed to take place. However, due to unrest in Chile, the assembly of Santiago de Chile was summarily moved to Madrid. Thunberg had to reschedule – and found help. Because the Australian sailors Riley Whitelum and Elayna Carausu had reported before the return journey on a tweet of the young Swede, in which she had asked for a ride to Europe. Whitelum and Carausu sail according to their own account on the "Vagabond" around the world. On her Youtube channel "Sailing La Vagabonde", however, no current video of the trip with Thunberg can be seen. On board are also the little son of Whitelum and Carausu, Lenny, and Thunberg's father Svante.Svante Thunberg had been there in August when his daughter brought from the German sailing professional Boris Herrmann and his co-skipper Pierre Casiraghi from England to New York had been. Because of a transatlantic race with the yacht "Malizia" Herrmann fell out this time as a possible sailor at the side of the Swede. But that may not be such a bad development for Greta Thunberg. Because for them, the return journey of their large transatlantic trip is obviously more pleasant, because the sailing ship this time offers significantly more space than the "Malizia", ​​which was a real racing yacht. Again and again Thunberg tweeted pictures of her crossing from the Atlantic. Once the entire crew can be seen, another time Greta is in a cozy bunk. For Thunberg, the more comfortable return journey is certainly also a personal relief. Because before the departure, she already stated that she was quite exhausted from the many traveling in North America. Nevertheless, she continued her protest on the Atlantic. "Skolstrejk för klimatet" also on the Atlantic Thunberg would not have been the most famous face of the climate protection movement, if it had not upheld last Friday their famous sign "Skolstrejk för klimatet". On 29 November, she celebrated the next school strike on the Atlantic Ocean. It is Thunberg's 67th action, which, with its sign in front of the Swedish Parliament, heralded the great climate movement and sensitized people around the world to their topic. At the same time, worldworld demonstrated many thousands of people in the "Global Climate Strike", who identify with the goals of the climate activist. Alone in Berlin tens of thousands of demonstrators went on the road last Friday in the global strike for the climate. And that is exactly what the Swedish activist is counting on. Thunberg had no fear of arriving too late in Madrid before returning home. After all, there are many other environmentalists on site: "There are countless other activists there who will speak there and deliver the same message as I. And it's not that my vote is irreplaceable."