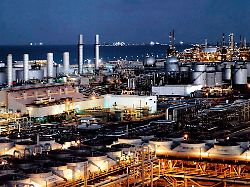 The world's largest IPO should flush Saudi Arabia a three-digit billion in the coffers as possible. They also need it, because the budget deficit is expected to rise significantly again in 2020.
Saudi Arabia expects a growing budget deficit in the coming year due to low oil prices and production cuts. For the financial year 2020 is expected a minus of 187 billion Rial, announced the kingdom. That corresponds to about 45 billion euros. In the current financial year, the deficit was still at the equivalent of 32 billion euros. Saudi Arabia is heavily dependent on revenues from oil sales and wants to become more independent of the precious commodity trade. "We are determined to implement economic reforms and diversify revenues," King Salman said in a televised Cabinet meeting on the budget. These included the proceeds from the IPO of the state oil company Aramco. It boasts revenues of more than $ 100 billion. Saudi Arabia is one of the world's three largest oil producers. The oil price decline had torn a record hole in the Saudi budget in 2015.