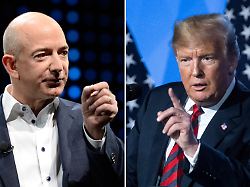 US President Trump and Amazon boss Bezos are in deep aversion – now the dispute even busy a court. Amazon accuses the president of having awarded an order only to Microsoft to harm Bezos. Now court documents will be published.
It's about a billion dollar major contract and the personal dispute of the US President with the richest man in the world – a court in the United States to clarify whether Trump has abused his office to harm Amazon CEO Jeff Bezos. The two are hostile, the President accuses Bezos in particular, to attack him on the "Washington Post". Bezos is the owner of the prestigious newspaper, which often reports critically about Trump. The $ 10 billion (€ 9 billion) deal was the "result of undue pressure" from Trump, who wanted to hurt his "political enemy," Amazon boss Jeff Bezos, according to court documents that have now been released The technology company filed a complaint with a US court in November, demanding a new award procedure and a new Pentagon decision for "unmistakable bias". "The question is whether the US President should be allowed to use the Defense Department's budget to pursue his own personal and political goals," criticized Amazon. A Pentagon spokeswoman rejected the allegations. There was "no external influence" during the tendering process, she said. The awarding of the contract to Microsoft at the end of October had been a surprise, since Amazon was considered a favorite until recently. Amazon and Microsoft had recently applied for the major order of the Pentagon with a term of ten years. Competitor Google had withdrawn at the end of last year with reference to ethical concerns from the race. US Secretary of Defense Mark Esper had rejected the criticism of Amazon as unfounded. The award of the contract to Microsoft was "free, fair" and "without external influence," said Esper. The so-called Jedi project for building a cloud system provides for an exchange of information of all military departments in a system using artificial intelligence.