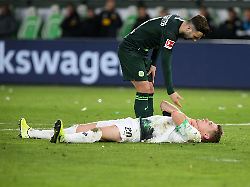 What the VfL Wolfsburg and Borussia Mönchengladbach offer is not a treat. In the initial phase it crashes twice in quick succession, then it takes a long time. It lasts until the final phase, then comes the disillusionment for the no longer leading league leader in the Bundesliga.
Borussia Mönchengladbach won immediately after the surprising Europa League knockout. the next sporting setback. Due to another goal in added time, Marco Rose's team lost 1: 2 (1: 1) to VfL Wolfsburg on Sunday and is thus rid of the league lead in the Bundesliga. Maximilian Arnold (90. + 1) scored the deserved winning goal for VfL. The Austrian Xaver Schlager, who was also courted by Borussia this season, gave the Wolfsburg team the lead in the 13th minute. Breel Embolo made up for the next attack (15th). Wolfsburg – Mönchengladbach 2: 1 (1: 1) Wolfsburg: Casteels – Knoche, Guilavogui, Brooks – Schlager (77th Gerhardt), Arnold – Mbabu, Roussillon – Steffen (59th Brekalo) – Weghorst, Joao Victor (87th Klaus) , – Trainer: GlasnerMönchengladbach: Sommer – Lainer (46. Beyer), Ginter, Elvedi, Bensebaini – Strobl, Hofmann – Benes (77. Stindl) – Embolo, Plea, Thuram (72. Herrmann). – Coach: Rose Referee: Felix Brych (Munich) Goals: 1-0 Schlager (13th), 1-1 Embolo (15th), 2-1 Arnold (90th + 1) Spectators: 25,580 Yellow cards: Brooks (2) , Roussillon, Schlager – Embolo (2), Strobl, Beyer Before Christmas the Gladbachers have two more games against SC Paderborn (Wednesday, 8.30 p.m.) and at Hertha BSC (Saturday, 6.30 p.m. each in the n-tv.de live ticker), to regain first place from the new leader RB Leipzig. Both coaches of this Sunday duel already knew each other very well from Austria. There, Rose won the Red Bull Salzburg championship last season in front of the Linz ASK run by today's Wolfsburg coach Oliver Glasner. In front of 25,580 spectators, it quickly became clear that both had a very similar idea of ​​football: high intensity, early attacking, fast pace, which prompted a partly wild ball hunt in the Volkswagen Arena, in which the Wolfsburg team was particularly interested Cut the better figure in the beginning. Joao Victor hit the post in the 5th minute. The Brazilian brought from Austria by Glasner had more chances in the first half than the entire Gladbach team. The Borussia had big problems with the brisk and biting way of playing the "wolves". Rose exchanges complete midfield, but the physical strain could not have played a decisive role. For one thing, VfL was still active in the Europa League on Thursday evening (1-0 against Saint-Etienne). And on the other hand, Rose exchanged his entire midfield compared to the 1: 2 loss to Basaksehir Istanbul. Laszlo Benes, Tobias Strobl and Jonas Hofmann played for Christoph Kramer, Florian Neuhaus and the suspended Denis Zakaria, and the Gladbachers were always dangerous if they managed to calm this very duel-focused game. They did this at the end of the first and especially at the beginning of the second half, when Wolfsburg goalkeeper Koen Casteels had to rescue once brilliantly against Marcus Thuram (54th) and once unorthodox with a shot from Alassane Plea (57th), shortly afterwards The guests were also lucky again in their own penalty area, because again Joao Victor missed the goal after a quick counterattack (59.) and the Swiss Kevin Mbabu hit the post after a free kick in Wolfsburg (60.). VfL was stronger in the final phase than Borussia, which was pushed further and further into the defensive.