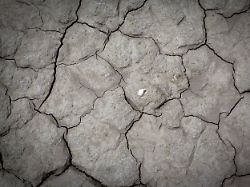 The fear of climate change is becoming more and more commonplace for many people. In the US, according to a study, 60 percent of those surveyed worried about the earthworm and its consequences. These citizens come from all social classes. Unlike the climate change deniers.
For many people, the UN climate negotiations seemed a long time very abstract and far from their lives. Meanwhile, more and more are dealing with the risks of global warming and its consequences for one's own life. Some even reverse their lives in order to counteract the climate crisis – while at the same time fighting against fears and other psychological problems. In the US, this development already has a name: "climate anxiety". Kate Schapira, a lecturer at the renowned Brown University in the eastern state of Rhode Island, has known this phenomenon for years – from herself and from her advice to other stakeholders. Because of the climate-damaging effect of each one, she has decided not to have children, and the 40-year-old never wants to get on a plane. Her concern about the progressing global warming was treated by others as "a personal, individual problem", says Schapira. She therefore wanted to check "if that is indeed the case". Since 2014, the scientist has been regularly present at weekly markets and similar events with a small booth reminiscent of Lucy's psychological counseling booth in the comic book series "Peanuts". 25 percent of respondents very concerned about climate change "Advice on climate anxiety, 5 cent. "The doctor is there," is a sign on Schapira's booth. And so passersby can talk to her about her fears of the future in the face of the climate crisis. Schapira has learned that she is far from the only one in her hometown of Providence, the mental burden of climate change. In a spring poll by Yale and George Mason universities, six in ten US citizens surveyed said they were at least "somehow worried" about global warming. Almost a quarter of respondents even said they were "very worried." The head of the Yale Climate Change Communication Program, Anthony Leiserowitz, divided US citizens into six categories of responses to climate change – from worried to disapproving , The general assumption that especially educated, liberal whites from the middle and upper classes worried about the global warming, had not been confirmed in his research. All groups are mixed, says Leiserowitz – except for the group of climate change deniers. There are "educated conservative white men" clearly in the majority. And they differed from the others "dramatically" in their perception of climate risks. Representatives from the very same demographic group control the White House, half Congress, and many of the country's largest corporations in the US. So it is not surprising that President Donald Trump ordered the US exit from the Paris Climate Agreement. Is my own behavior really that crucial? For Washington psychiatrist Lise Van Susteren, who has spent 15 years studying the impact of climate change on mental health , ignoring climate change is common among "people who try to deny that they too are vulnerable". In her estimation, "everyone feels a little bit of climate anxiety". The US Psychologists' Association stated in a report in 2017 that psychological reactions to climate change, such as "conflict prevention, fatalism, fear, helplessness and resignation" are increasing. Van Susteren explains that many people wonder if their behavior is relevant in the face of a global problem.