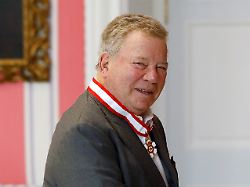 As Caotain Kirk, William Shatner becomes world famous. He is considered a heartthrob. In 1969 his first marriage was divorced. After that, Shatner marries three more times. Now his fourth marriage of the now 88-year-old is about to go out.
The fourth marriage of Canadian actor William Shatner is about to end after 18 years. The "Captain Kirk" star from the science fiction cult series "Spaceship Enterprise" had filed for divorce, reported the US magazine "People", citing court documents. The 88-year-old had married the native Elizabeth Martin, 61 years old, in 2001. William Shatner (Photo: REUTERS) Shatner has three daughters from his first divorce with Canadian actress Gloria Rand in 1969. His second marriage to Marcy Lafferty, starring in "Star Trek: The Movie" (1979), split in 1996. The third marriage ended in 1999 with the tragic death of his wife Nerine Kidd. She had been found dead in the communal swimming pool. The cause was then stated as drowning after taking alcohol and tablets.