Menu
Home > news > He calls her "Catherine": William and Kate chat about the family 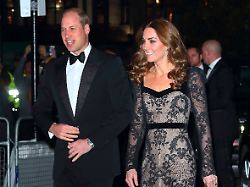 Duchess Kate and Prince William talk openly about their family habits in a TV Christmas special. In this way, viewers learn what Prince Louis' first word was and how Prince William won his wife's heart.
Prince William and Duchess Kate baked together for a good cause – and spilled a whole host of private details. On the BBC show "A Berry Royal Christmas …" the couple stood in the kitchen with British TV chef Mary Berry to thank charities from charities. A special treat for the audience: well-measured bites from the sewing box of the Royals. For example, Kate revealed that Prince William was a good cook. During his studies he tried to "impress" her with dishes like Bolognese. The couple had once studied in the same year at St. Andrews University in Scotland and lived in an apartment with other students. William studied geography, Kate art history. In order not to attract attention, according to the "Mirror" William is said to have used the code name "Steve". Prince George is a Chelsea fan Kate, as the public does. The millionaire daughter was born as Catherine Elizabeth Middleton. Her nickname from school does not sound that royal: she was called "Squeak" at the time, based on her guinea pig, the 37-year-old revealed in April. Charming news for TV host Mary Berry: "Mary" was one of them Prince Louis's first words. The little boy discovered a cookbook from the TV cook on the shelf at home. "Children are totally fascinated by faces. And your face is on all of their cookbooks," Kate explained on the show. "He would definitely recognize you if he saw you today." Traditionally, Christmas gifts in England are only unwrapped on December 25th. In William's family, a little curiosity was allowed the day before, Kate said. It is "tradition to open a gift on Christmas Eve. It's nice". The couple and their children traditionally celebrate Christmas Day with the Queen and other members of the royal family at Sandringham House, a Queen's estate in Norfolk. Homelessness and poverty are at home Prince William tries to teach his children early on that their life in the palace is not that Is norm. He is already talking to Prince George and four-year-old Princess Charlotte about issues such as homelessness and poverty – also because these were issues of the heart for his late mother, Princess Diana. "My mother knew what she was doing. She knew that it is very important to realize that there is life outside the palace and that you see real people struggling with real problems." Now William brings his Children have the same values ​​- for example on the way to school: "Whenever we see someone sleeping on the street, we talk about it and I explain it to them." The children would also be very interested, explains the prince: "Then they ask: 'Why can't they go home?'" Kate cannot be baked for birthday cake: she stays until late at night before every day of honor for her children awake to bake cakes. "It has become a kind of tradition that I stay up until midnight, with ridiculous amounts of baking mixes and glazes and then baking too much," said the Duchess. "But I love it."