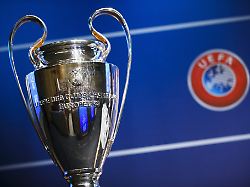 The Champions League is migrating to the Internet. The pay station Sky loses its broadcast rights to the Football Champions League from the next season to the streaming service Dazn. Previously, the top game had gone to Amazon.
The Champions League is from the season 2021/2022 not seen on Sky. This confirmed the pay station. In the just completed tendering process, "after about 20 years of partnership with Uefa, they could not agree on a continuation of the cooperation," Sky Deutschland leader Carsten Schmidt said. "We have an economically clear and responsible view on the value of sports rights, but we were not prepared to go beyond the high value we attach to that right, even in the interests of our customers." The main winner of the rights is DAZN, there run after "Bild" information from 2021 all live games of the premier class in European football including the final. Earlier it had become known that Amazon had won the contract for the top game on Tuesday starting in 2021. A good month and a half after the coup of the Telekom with the purchase of the rights for the European championship 2024 becomes clear that it becomes ever more confusing for the TV spectators. After announcement of the Amazon deal was eagerly awaited, who receives the further rights. To the prospective customers belonged according to industry circles both the current right owners Sky and Dazn as well as the Telekom and the free TV transmitters ARD, ZDF and RTL. The Champions League rights are considered the most valuable after those for the Bundesliga. Especially for Sky and Dazn they are regarded as indispensable.Final free receivable? Since the season 2018/19 and until 2020/21, the premier class is to be seen exclusively on the pay-TV channel Sky and the also charged Dazn streaming service. The deadline for the next legal period (2021/22 to 2023/24) expired at the beginning of December. Amazon is considered a market power and had recently attracted attention with the purchase of media rights for two Premier League match days. The Uefa had the process marketed through the agency team. According to information from the German Press Agency, the invitation to tender also contained a package that contained only the final and could only be bought by free-TV broadcasters. According to the State Broadcasting Treaty, a final game with German participation must always be seen on free-to-air television. The ZDF had until 2006 for six years Champions League games shown before the games disappeared through the current contract behind the payment barrier. Especially great was the annoyance of many football supporters in May 2019, because not even the victory of Jürgen Klopps FC Liverpool could be seen in the final against Tottenham Hotspur in free-TV. The ZDF failed with the attempt, at least for the final to buy a sub-license, at the veto of Dazn.