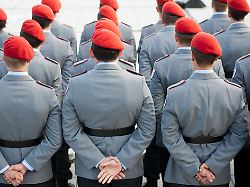 So far, the approximately 300 Bundeswehr soldiers of the Jewish faith do not have their own pastors. According to the will of the Federal Government this will change soon. In the future, Muslim soldiers should also receive spiritual guidance.
The Jewish soldiers in the Bundeswehr should in future be cared for by military rabbis. For this purpose, the Federal Republic of Germany concludes an international treaty with the Central Council of Jews, as the Federal Cabinet decided. The planned state contract should "ensure the fundamental right of Jewish soldiers to freedom of religion," said government spokesman Steffen Seibert. So far, there are only Protestant and Catholic pastors in the Bundeswehr, and since 1957. The State Treaty with the Central Council of Jews to be signed on 20 December. The law passed by the Federal Cabinet regulates the government's approval of the contract. Next, according to Seibert, work is underway to "ensure spiritual support for Muslim members of the Bundeswehr as well". How exactly this could be organized is currently being examined. According to estimates serve nearly 300 soldiers of Jewish faith in the Bundeswehr. The Green MEPs Konstantin von Notz and Tobias Lindner evaluated the planned state treaty as "a positive sign for the promotion of active Jewish life in Germany". Even the currently largest non-Christian group in the Bundeswehr, the approximately 3000 people of Muslim faith, a corresponding pastoral care must be available. "Feldrabbiner" existed in the German Empire in the First World War. Rabbi Leo Baeck, at the time the most important representative of liberal Jewry in Germany, was one of them. The Nazis abolished the practice later. There are already Jewish pastors in the armed forces in the United States, France, the United Kingdom and the Netherlands. And of course in Israel, where, according to the army, there are around 120 active military rabbis.