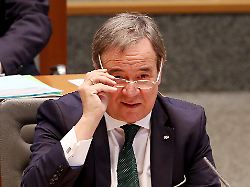 The "crime scene" is one of the most successful German television series of all time. North Rhine-Westphalia's Prime Minister Armin Laschet is also a big fan. In the new year he will take on a small guest role in the series.
North Rhine-Westphalia's Prime Minister Armin Laschet went among the actors: In the "Tatort" episode "The Team" Laschet plays himself on a guest appearance, as the "Bild" newspaper reported. "It was an exciting day of shooting, also with nervousness and with a lot of respect for the professionals on the set," said the CDU politician to the newspaper. The broadcast date is January 1st, 2020. In the two-minute scene, he gives a speech to seven commissioners, represented by TV stars like Ben Becker, Jörg Hartmann and Anna Schudt, who are supposed to solve a series of murders in NRW. "As a big crime scene fan I've been following the exciting cases for a long time, "said Laschet. He was therefore very pleased when director Jan Georg Schütte made him the offer to support the improvisation crime scene shot in Siegburg near Cologne with a mini appearance as Prime Minister. Laschet is not the first politician to appear in the "crime scene": 2004 Saarland's then Prime Minister Peter Müller ventured in front of the camera for the episode "Teufel im Leib". He also played himself.