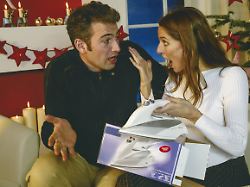 Christmas, the festival of love, often has unpleasant surprises for families and couples. Psychotherapist Krüger explains why this is sometimes sufficient as a reason to completely break away from a relationship.
Fairy lights, the smell of roasts and pure harmony: for the majority, the rough ideas for Christmas are not that far apart. However, the reality is often very different. "Christmas is an absolute state of emergency for many families. It is absurd: there is controversy because one expects it to be peaceful and harmonious," explains psychotherapist and author Dr. Wolfgang Krüger at n-tv.de. "The holidays seem like a big production. They are more complex than some theatrical performances. Expectations are correspondingly unrealistic: The partner who has always been difficult should be courteous and easy to deal with, the nagging relatives are suddenly understanding," the expert continues , ADVERTISEMENT Love, power and passion: The rules of success for fair conflict settlement in a partnership (HERDER spectrum) * Data protection Disappointments are inevitable. It's no wonder that 30 percent of families report big disputes these days, even more than 60 percent of relationship problems. The festival, which actually stands for peaceful coexistence and harmony, becomes a real stress test. Disputes are only symptoms The special interpersonal situations at Christmas give the impression that a certain number of couples do not survive the holidays as a couple. Is the Christmas season really a time of separation? In fact, several studies have shown that there is an increasing number of disputes during the Advent season, i.e. in the weeks before Christmas. British divorce lawyer Deborah Jeff interviewed 3,000 couples. The results show that couples pre-Christmas quarrels an average of four times a day. The causes are given money worries, unfair distribution of work, the choice of gifts and the coordination of family visits. In addition, there is a lack of time and a lack of attention for one another, as studies show, there are actually more separations in the almost four weeks before Christmas than in the months before. The disputes are rarely the trigger for the end of a relationship at this time. Rather, it is about dissatisfaction, pent-up and unsaid, which has been smoldering for weeks or even months. It could also be that the memories of the last festival together are so seriously unpleasant that you don't want to experience it again. Or you have already met someone else and want to do a clear ship before the festival of love. For many people, it is not just about Christmas, but also at the end of the year that it is important to think back to what is really important. Tips for a successful party For many who are in relationships with whom they are not satisfied the idea of ​​spending the feast of love with this partner is horrible – be it as a couple or at the already challenging family gatherings. So if possible, take the decisive step before the holidays and separate. On the other hand, many reject a relationship directly at Christmas for moral reasons, but if you are satisfied with your relationship and stick to it, you can prevent the general Christmas stress and quarrels by clearing up a few points beforehand. For example, Krüger thinks it makes sense to ask your partner what you can do to make him happy at least a week before the festival, and to set a price limit for the gifts and give less and prepare less food overall. This can take a lot of stress. Those who expect family disputes can invite colleagues, neighbors or friends to the party. In this way, an exciting family dynamic can be dissolved. In addition, one should expect that something will always go wrong in the implementation of the Christmas rituals. Incidentally, there is another high season for separations in addition to the pre-Christmas period. This is in the Easter holidays, because holidays also show whether you still fit together or not. And here, too, the causes mostly lie in the weeks or months before spring. The crucial factors often become clearer during this period. In addition, many fundamental desires for changes are awakened in spring.