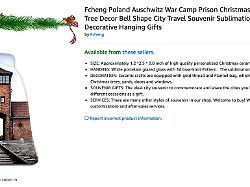 Amazon sells Christmas decorations on its platform with motifs from the Auschwitz concentration camp and reaps massive criticism. The memorial of the concentration camp reacts outraged and sees in it a "disrespect". Now the mail order company reacts.
Amazon has withdrawn after heavy criticism of the sale of Christmas decorations with motifs of the extermination camp Auschwitz the affected products from the market. The online retailer responded to the criticism of the Auschwitz-Birkenau memorial, as reported by "metro.co.uk". Several Amazon customers had discovered the Christmas decorations and then complained about it. Among other things, the dealer sold through a different company on the Amazon Market Place Christmas tree pendant in star and bell shape with pictures of Auschwitz. Representatives of the memorial Auschwitz responded via Twitter: "The sale of Christmas ornaments with pictures of Auschwitz is unreasonable. Pictures on a bottle opener are disturbing and disrespectful ", tweeted those responsible and asked Amazon to pull the goods out of circulation. In another investigation, the memorial then discovered a mousepad and a ceramic with a railway car in which Jews were deported. Amazon responded promptly to the criticism and stated, "All sellers must follow our sales guidelines, and action will be taken against those who do not comply with them and they will face an account cancellation," a spokesperson for "metro.co.uk" said Auschwitz-Birkenau concentration camps killed around 1.1 million people, including many children, according to the memorial. Since 1947 there is an exhibition there to preserve the memory of the Holocaust.