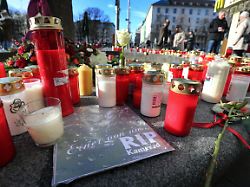 A 49-year-old firefighter is attacked and killed by a group of youths in the middle of downtown Augsburg. Only a few days after the deadly attack, all seven suspects are in custody. Many questions already have answers – others remain open. What happened: A 49-year-old employee of the Augsburg fire brigade died on Friday evening in a dispute with a group of young people on Königsplatz in the center of Augsburg. The man was with his wife and a friendly couple at the Christmas market and then in a restaurant. On the way home it came to 22.40 clock to argue with the group. The man was killed, his 50-year-old companion was beaten and injured in the face. The women remained physically unhurt. After the crime, according to testimonies, a total of seven young men have fled the scene.What was the cause of death? One of the youth hit the firefighter "suddenly and with full force from the side against the head," says Gerhard Zintl, head of the Criminal Investigation Augsburg on one Press conference. The victim fell and remained lying on the ground. The blow led to death. Emergency physicians tried to revive the 49-year-old – but without success. What is known about the crime The victims first passed by the group of youths. Meanwhile, there was a battle of words, the contents of which is still unknown. The killed victim then fell again and was then surrounded by the youth. What is known about the perpetrators? According to the authorities, the suspected main culprit is a 17-year-old German born in Augsburg, who also has Turkish and Lebanese citizenship. A second arrested man was also born in Augsburg, 17 years old with Italian citizenship. The other perpetrators are all men born in Germany and between 17 and 20 years old. Some of the alleged perpetrators are known to the police for various offenses, including assault, says Zintl. The suspects are said to have known each other "for some time". Whether the young suspects were intoxicated with drugs, the investigators could not say. Nothing can be said about alcohol in the blood after a long time between Friday's act and arrest on Sunday, Zintl said. Why did the parties get into a fight? That's not known. According to media reports, it should have acted in the dispute over trivialities. The group of young people had "conspicuously moved in the city center," says Zintl. According to media reports, the victim and his companion should have admonished her. The gang have then kicked a can over the square, as witnesses reported. The argument had rocked up. This was not confirmed by the police for the time being. How were the suspects arrested? The fast search success succeeded due to a video surveillance. After the crime, the police evaluated material from 15 video cameras placed at the scene. The video surveillance at Augsburg Königsplatz, the city's central bus and tram hub, had only been expanded in December 2018 as part of a state program. This allowed them to identify the alleged chief offender and another suspect. A short time later, five other suspects were caught. A 19-year-old joined the police, accompanied by his lawyer. What is being charged with the suspects An arrest warrant for manslaughter and dangerous assault has been issued against the 17-year-old prime suspect. This was announced by the head of the Augsburg public prosecutor, Rolf Werlitz, in front of journalists. Against four other suspects were arrest warrants for aiding and abetting homicide and joint assault. For two other of the seven suspects, the opening of arrest warrants are still pending, this should be done on Monday. Here, too, it is about aiding and abetting homicide and joint bodily harm. Why is there despite arrest criticism of video cameras? Data protection warn of more video surveillance. The cities should not be plastered with cameras, said the Bavarian data protection officer Thomas Petri the German Press Agency. "Video surveillance must be the exception that is justified, out of the spirit of protection." Petri emphasized that every camera in public space is a violation of the fundamental rights of citizens. "You have to say that clearly." While some people tolerated surveillance, others have concerns. "We have many citizens complaining about video surveillance." How to proceed now A 20-member investigation team continues to work on the case and evaluates testimonies. On Monday evening candles for the killed firefighter are set up at all rescue and fire stations as a sign of sympathy, according to the German fire brigade union. The Bavarian Prime Minister Markus Söder was "shaken and moved" by the case. Before a board meeting of his party, he announced a test to whether the police presence in the city centers should be increased in weeks such as the Christmas period. "