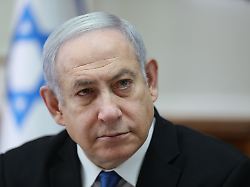 The stalemate between right-wing religious and center-left camps in Israel does not allow the formation of a government. Parliament votes for its dissolution and calls for new elections. They are the third in one year.
Efforts to form a government in Israel failed after the election in September. Parliament voted in favor of its dissolution and the new election will take place on 2 March 2020, as the Parliament in Jerusalem announced. This will be the third choice within a year after April and September 2019. At midnight, a final deadline for government formation passed. Thereafter, Parliament also voted in favor of dissolution of the bill in second and third reading. Now politicians have 82 days for the next election campaign. Twice this year a new parliament was elected in Israel, but because of a stalemate between the right-wing and the center-left camp, no government formation was possible. Efforts to form a grand coalition between Blauer-Weiß and the right-wing conservative Likud of former Prime Minister Benjamin Netanyahu also failed after the election on 17 September. Netanyahu failed to form a coalition even after the previous election in April. He has been in office since 2009. Netanyahu under pressure After the September election, the head of government insisted on joining the Alliance with a whole bloc of right-wing and religious parties. His challenger Benny Gantz had pledged to form a liberal, secular coalition and also rejected an alliance with Netanyahu as head of government for allegations of corruption. Netanyahu is under massive pressure as Attorney General Avichai Mandelblit charges him with corruption. The allegations are about the suspicion of influencing the media, allegedly crooked deals with companies and luxury gifts of friendly business people in return for political favors. Netanyahu has until 1 January to petition Parliament for immunity from prosecution. Pro-Netanyahu against anti-Netanyahu Gideon Rahat, a professor of politics at the Hebrew University in Jerusalem, does not expect a new strategy from the parties for the upcoming election campaign: "It will be the same Be a game, pro-Netanyahu, anti-Netanyahu. " And Avigdor Lieberman of the ultra right-wing party Israel Beitenu will once again try to find a middle-ground position and establish a grand coalition. Netanyahu will try to win over voters by calling them to "protect him from the evil people" "who wanted to chase him out of office with corruption espionage, says Rahat. The other side will argue: "He is corrupt and should not be the prime minister." Blue-white emerged at the September election with 33 out of 120 mandates as the strongest force from the election. The Likud came to 32 seats. However, Netanyahu received 55 recommendations from MPs for the post of Prime Minister, Gantz one vote less. Netanyahu's Likud party will also elect a new chairman on December 26, the party confirmed. The 70-year-old Netanyahu wants to compete in the election despite the corruption charges again. Netanyahu's influential rival, former Minister of Education and Interior Minister Gideon Saar, also wants to take over the party presidency and become prime minister.