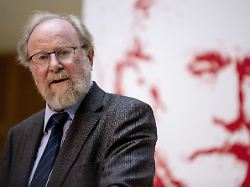 SPD veteran Wolfgang Thierse sees his party on the brink. The new party leadership had been chosen for an exit from the GroKo. But she was not legitimized for that. The dilemma is unsolvable, analyzes the passionate social democrat. Way out? A minority government.
The longtime Bundestag President Wolfgang Thierse sees the situation of his party so bleak that he advises the Union to a minority government without the Social Democrats. According to a report from the "Tagesspiegel", Thierse predicts a total collapse of the SPD under the new leadership: "A party that does not learn to praise its own government achievements, but is characterized by a climate of discontent, suspicion and hatred have no future, "Thierse told the newspaper. Because it does not matter who is at their head. The new leadership duo Norbert Walter-Borjans and Saskia Esken not solve the dilemma of the SPD and their attitude to the Grand Coalition, but sharpens the dilemma, explained Thierse the sheet. The logic of the latest personnel decision would be the exit from the coalition, because both candidates had won the GroKo-Aus the member decision, explained Thierse. At the same time, the duo is not legitimized inside the party. Thierse calculated that the turnout in the membership vote for joining the grand coalition was about 70 percent higher than in the decision on the party presidency. Also, the approval was 66 percent higher than now in the presidential election. Esken and Walter-Borjans were only elected by around 53 percent of the SPD members. "However, a non-exit now damages the credibility of Esken / Borjans," Thierse continued. A coalition exit, however, endangered important achievements of the SPD, "especially the basic pension, a major project of the SPD, for which she has long struggled." The 76-year-old Thierse was part of the civil rights movement in the GDR and was from 1998 to 2005 President of the German Bundestag.Angesichts in the SPD Thierse called a CDU / CSU minority government led by Chancellor Angela Merkel a realistic option. Because the budget 2020 is decided and Merkel will be with the German EU Council Presidency in mid-2020, the "Queen of Europe and the SPD can only complain and mosern".