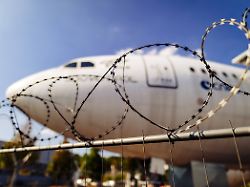 To ensure safety on a deportation flight, police officers accompany the process. According to the federal government, the number of people deported has decreased in the past two years, but the number of civil servants employed has increased significantly. There are two main reasons for this.
The number of police officers deployed to deport people by plane rose sharply from January to October 2019. During this period, 11,480 civil servants were deployed, as can be seen from the Federal Government's response to a request from the Left Group in the Bundestag, which was available to the "Neue Osnabrücker Zeitung" ("NOZ"). In the entire previous year, however, just under 11,000 police officers were involved in deportation flights. According to the newspaper, the number of police officers deployed has risen significantly since 2015: At that time, the federal government reported 5841 civil servants on deportation flights. However, the number of foreigners who accompanied the police officers on the flights decreased over the same period. According to a response from the Federal Ministry of the Interior, it fell from 10,787 in 2015 to 7,987 in the past year. The Federal Ministry of the Interior informed the "NOZ" that the number of police officers had to be increased in the past few months "to ensure safety on board the aircraft" , For each repatriation, a risk analysis was drawn up. Jörg Radek, vice-chairman of the police union, confirmed to the newspaper that repatriations were "extremely burdensome" for the officers deployed. The police officers would feel that many of those who were to be returned were in an exceptional emotional situation. "They defend themselves by all means: scratching, biting, spitting, kicking. Police officers were sometimes seriously injured." According to the Federal Government, the number of officers deployed is also increasing because people are accompanying people in increasingly distant countries in Asia or Africa The newspaper reported that in the past year almost every second police-led return was aimed at the Balkans. 1521 people were deported to Albania alone. Italy (643), Morocco (439) and Afghanistan (283) were also served.