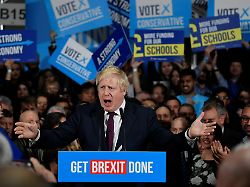 The betting passion of the British knows no bounds. In the upcoming parliamentary elections, the bookmakers are already agreed. If it goes by the odds, then Premier Johnson may continue to reside on Downing Street.
The bookmakers in the rival Britain are holding their own: Boris Johnson, in the view of the bookmakers, will remain prime minister after Thursday's general election and rule the country with an absolute majority of his Tory party. The bookmakers were rarely wrong with their quotas in recent years, but not always right. For example, their forecasts of betting stakes failed completely during the Brexit referendum in 2016, for example. According to the betting odds comparison website Oddschecker, the weather is almost certain that the Conservatives will get most of the 650 seats in the lower house. Who puts 20 pounds on it, gets 21 pounds, if that happens. Those who bet on Labor as the party with the most seats will receive 17 pounds for one pound. Anyone who bets that Labor can rule by an absolute majority gets even 34 pounds for a pound – should that be true. However, the lead of Johnson and his Tories has also decreased slightly among bookmakers. The online bookmaker Sporting Index said the bets pointed to a comparatively small majority of around 340 seats. At the beginning of the week, the bookmakers were even more likely to have 365 seats. "Jeremy Corbyn has proven to be a strong campaigner again," said sports index spokesman Ryan Haliwell. "But a Labor majority is very unlikely at odds of 25/1," he said. Boris Johnson could probably move in at 10 Downing Street.