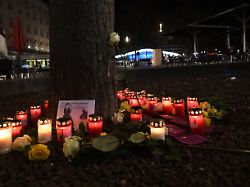 It is still unknown who is responsible for the deadly attack on a 49-year-old in Augsburg. The police are now evaluating footage from video cameras – it is also considered to publish footage to get clues to the perpetrators.
A 49-year-old man dies in Augsburg after a fatal attack, and still the perpetrators are not caught. In the search, the police is now on the evaluation of image and video material. Possibly still on Sunday the investigators could go in consultation with the responsible public prosecutor with such material to the public, said a police spokesman. This is currently being examined. At the crime scene, the central Königsplatz, several video cameras are installed, their recordings are evaluated by the police, reported the "Süddeutsche Zeitung". The place is therefore one of the few camera surveillance in Augsburg, as it is considered a meeting place of the drug scene. What has been known about the deed so far: In a dispute with a group of young men, a 49-year-old man was attacked and killed in Augsburg's city center on Friday evening. Along with his wife and a friendly couple, the later victim was traveling downtown when they came across the group. As the police announced on Saturday, it came from yet unknown cause to the dispute. The perpetrators are fleeting. "Compassion belongs to the bereaved" After the deadly attack, there was mourning and horror in the city. On Königsplatz people laid flowers on Saturday evening, candles and grave lights burned. Augsburg Mayor Kurt Gribl of the CSU was dismayed by the act. The city has become the scene of a momentous violence, he wrote on his Facebook page. "All our compassion belongs to the survivors of the deceased, his friends and colleagues in the city of Augsburg, especially the comrades and comrades in the professional fire department." To the crime is known that one of the young men from the group beat the victim against the head. The 49-year-old from the Augsburg district crashed and remained lying on the ground. Even the 50-year-old companion was beaten and injured in the face, the women, however, were not addressed. Emergency physicians were still trying to revive the 49-year-old – but without success: The man died in the ambulance. He was a member of the fire department Augsburg. The Kripo set up a 20-member investigation team.