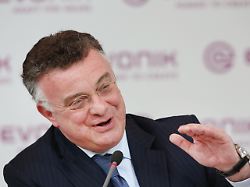 Evonik expects operating profits of more than € 2 billion this year. 2020 then becomes challenging. Therefore, CEO Kullmann also buttons on Fridays for Future, speaks of "hysteria and polemics".
Evonik CEO Christian Kullmann criticizes the initiator of the movement Fridays for Future. "I feel that what Greta Thunberg sometimes says, as blatant," said Kullmann the "Süddeutsche Zeitung". The assumption that he, as the CEO, would rob Thunberg's generation of the future, was "hysteria and polemics," according to Kullmann. "I reject that sharply." The climate debate was moralizing and largely inexpedienced. "We have climate mystery." Evonik 26.03 The chemical industry has significantly reduced its energy requirements and emissions over the past 30 years, Kullmann continued: "And that was the time before Greta. You do not have to explain what sustainability is." Without chemistry, there would be neither electric cars nor wind turbines. "Only with us you will be able to achieve the climate protection goals." It was not enough to proclaim a climate-neutral production as a goal. Rather, it depends on conditions, such as the reliable supply of green electricity to the chemical industry. "In Germany, however, we would have to continue massively expanding solar and wind generation and at the same time significantly cut electricity costs," says Kullmann. "In the current state of the art, that seems to me to be an illusion." Annual profit target confirmedKullmann has been Chief Executive Officer of the MDax listed chemical company Evonik since 2017. The 50-year-old trades in the industry as the likely future president of the Chemical Industry Association (VCI). "I can not say anything about that today," explained Kullmann. The VCI has with the outgoing Henkel CEO Hans Van Bylen "a very good president at the top" .Evonik will "from today's point of view, the annual target to achieve an operating profit (Ebitda) of at least 2.15 billion euros. "This is much heavier this year than 2018," said Kullmann. 2020 will not be better in the foreseeable future. "Evonik is not in crisis, but we are preparing for a crisis." Risks are an intensification of the trade conflict between the US and China, an uncontrolled Brexit or a worsening of military conflicts in the Middle East.