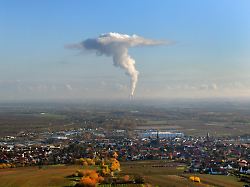 Nuclear phase-out – yes or no? For the economist sense, the answer is clear. He not only expresses criticism of the federal government's nuclear phase-out plans, but even predicts that the targeted climate goals in Germany cannot be achieved in this way.
According to the economist Hans-Werner Sinn, Germany cannot achieve its climate goals without nuclear power. The former President of the Munich Ifo Institute told the "Passauer Neue Presse": "It will not be otherwise. You cannot get out of coal and nuclear energy at the same time and then additionally increase the electricity consumption massively by switching to electric cars." In the conversation, Sinn referred to the principle of insight or experience and said: "You should have thought it over and refrained from phasing out nuclear power. Now you will fail and get a bloody nose." In addition, the climate targets will not be achieved on the path chosen: "At the latest in ten years, people will realize that this will not work." The Greens should also see that, the 71-year-old said. On Wednesday, the federal government had given a clear rejection of speculation about a move away from nuclear phase-out due to climate protection. Previously, CDU economic politician Joachim Pfeiffer had questioned the nuclear phase-out that was decided in 2011 after the Fukushima nuclear disaster. Under certain circumstances, he would be open to operating nuclear power plants in the future, the CDU politician told Spiegel. "It won't fail because of me and the Union faction."