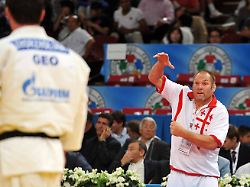 The two-time Austrian judo Olympic champion and later national team coach of Georgia, Peter Seisenbacher, should in his role as judo coach minors have sometimes sexually abused for years. Now he is sentenced to imprisonment. The judge's verdict triggers horror.
The Austrian judo Olympic champion Peter Seisenbacher has been sentenced to five years imprisonment for sexual abuse of minors. The 59-year-old was convicted in full at the Vienna Regional Court. Seisenbacher showed no emotion at the verdict. Some of his followers from judo circles seemed appalled. Judge Christoph Bauer said the stress testers had made an "extremely credible" impression. "We did not get the impression that the three were lying, wrong or had agreed," Bauer said. Eisenbacher, who had pleaded not guilty at the beginning of the proceedings, was also accused of sexual abuse of three minors during his time as a coach Abuse of an authority relationship. Two grown-up women (one of whom now lives as a man, note) testified to being sexually abused by Seisenbacher children. One of them over several years. The youngest victim was nine years old. Another woman reported an abuse attempt. The exact periods of misuse offenses are not known, but the defended attempt is said to have taken place in 2001. Against the verdict can be appealed from both sides. Eisenbacher dived under Eisenbacher, who had brought in 1984 in Los Angeles and 1988 in Seoul Olympic gold at middleweight, was on 19 December 2016 the first trial date at the Vienna Strafland court excused and then submerged. First, he was arrested in the Ukrainian capital of Kiev, but later released. Only a few weeks ago, he was taken up again when crossing the border from Ukraine to Poland. On the Internet protests stirred that the punishment for such a serious crime turned out too small. Under Austrian law, a sentence of up to ten years would have been possible. Softening were Seisenbacher's previous insolence, the long past offense period and that for about 15 years, no further criminal acts of Judo Olympic champion have become known. The defense had demanded an acquittal. To make matters worse, the Senate on the other hand evaluated the coincidence of several crimes and offenses, that there were several victims and the long period of tardiness.