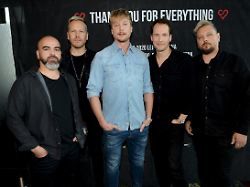 After almost 20 years in the music business is over. Sunrise Avenue, the Finnish band around vocalist and "The Voice of Germany" juror Samu Haber has announced their release. The fans of the group react in dismay. But some are angry too.
"I can not stop crying": Sunrise Avenue is history after a recent tour in 2020. This was announced by the Finnish rock group led by frontman Samu Haber at a press conference in Helsinki. The fans are deeply disappointed, as they make clear on the social networks. * Privacy "I can not handle that right now," writes a user on Twitter, for example. However, she is looking forward to the band's farewell tour in the summer of 2020. The "Thank You For Everything" tour will take the band one last time through Germany, Austria and Switzerland. The final date on August 15th will be held in front of a home crowd in Helsinki. "Shit, now I'm crying, thanks for 13 fantastic years," comments another follower of the band Habers Farewell Post on Instagram. And many more disappointed fans in the comment column to speak. "I can hardly believe it, we will miss you," said another Userin. But the fans also show a lot of understanding for the decision: "As long as you are happy, that's all I want," someone puts it in a nutshell. "A little brutal" Under the same post but also some angry comments. The way the announcement pokes some fans upset. "It's a little bit brutal to start a countdown and then tell us it's all over," writes an angry fan. The band posted a week ago in the social media the date of November 2nd without a comment. Many fans had hoped for good news, a new song or a new album. Instead, the countdown to the announcement pointed out that the group will go their separate ways. But at least over the hoped for new song, the followers of Sunrise Avenue can actually be happy. Because after the announcement of the resolution, the last single "Thank You For Everything" was released. At least a small consolation for the fans.