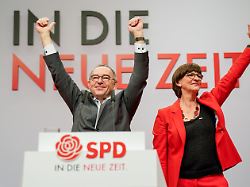 About half a year after the withdrawal of Andrea Nahles, the SPD has again a regular leadership. For the first time, the party will be led by a duo in the future. The party congress in Berlin chooses two critics of the grand coalition, Esken and Walter Borjans. Both announce corrections in their policies.
Once again, the SPD has a new head: Left-wing Member of Parliament Saskia Esken and former North Rhine-Westphalian Minister of Finance Norbert Walter-Borjans will lead the party together in the future. Both were elected by a large majority at a party congress in Berlin. Walter-Borjans scored 89.2 percent, a much better result than Esken, for which 75.9 percent of the delegates spoke. For the first time, the SPD has a double point. In their application speeches, Esken and Walter-Borjans declared to the more than 600 delegates that they wanted to campaign for more social justice and climate protection. They doubted if this was possible with the Union in the Grand Coalition. There are with them as staunch SPD leaders a dawn in a "new time," said Esken and Walter Borjans in unison. "I was and I'm skeptical about the future of this Grand Coalition," said Esken, who had won the SPD membership decision in a duo with Walter Borjans. "For too long, the SPD has in recent years, in its own thinking more grand coalition as an independent force." The SPD gives the grand coalition a "realistic chance of a continuation" – "no more, but not less". Like her partner Walter-Borjans, the 58-year-old SPD woman criticized CDU leader Annegret Kramp-Karrenbauer. That this ties the implementation of the laboriously negotiated land rent to the continued existence of the coalition, was disrespectful. The Union had made it clear that it did not want to tighten up the coalition agreement. Abandonment of the black NullWalter Borjans intensified the tone towards the Union and throbbed for a stronger profile of the polled SPD. In a democracy, you have to make compromises, but they should not "blur where we stand," Walter Borjans said. Esken demanded in her speech a reversal of her party in labor market policy. Germany is one of the largest low-wage sectors in Europe. The SPD contributed to this low-wage sector being created. "We were the party that introduced Hartz IV, we are the party that overcomes Hartz IV." In financial and security policy, there is a confrontation with the Union. If necessary, Walter-Borjans wants to forego the debt brake in the Basic Law in favor of necessary investments. At the beginning of the congress, the outgoing chairman Malu Dreyer called for unity and emphasized the successes of the SPD in the coalition. Then she was "mighty proud," said the Rhineland-Palatinate Prime Minister. "It makes a difference who rules." At the same time she campaigned for a fresh start, the SPD should no longer be perceived as a "tactics party". The duo follows Andrea Nahles, who had withdrawn from the position in the middle of the year. For her part, she inherited the luckless Martin Schulz. It is thus since 2017, the third party leadership.