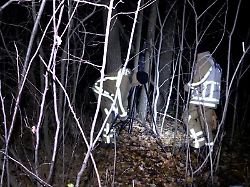 Since September, there is no sign of life from a 27-year-old from Duisburg. Her husband says she was traveling with a friend. But then he gets involved in contradictions. Now a corpse is found.
A missing since September woman from Duisburg is apparently dead. In a wooded area, a female body was found, according to information from the "Bild" newspaper, it should be the 27-year-old mine O. act. Accordingly, the man of the dead was arrested as urgent suspects. The police confirmed an arrest. Whether the dead person is actually the mother of a five-year-old son, however, can be confirmed beyond doubt only after completion of the autopsy. The husband had testified that the woman was traveling to a friend on September 7th. After that she had reported neither to her family nor to friends. Her cell phone was no longer available. Later, however, it turned out that her friend was no longer living in Germany at that time. Neighbors had also contacted the police after a bad smell leaked from a garage the man had rented. Although no body was found in the investigation, but more evidence that substantiated the suspicion of a crime. The police suspected that the killed woman was hidden in the garage for a long time.In an interrogation on Thursday, the 28-year-old, according to the newspaper finally admitted, killed his wife and the body in a difficult to access forest in Duisburg district Untermeiderich hidden to have. Finally, the buried corpse was found at the place indicated. It is still unclear how the young woman with Afghan roots lost her life. Allegedly, there had been a dispute. She had recently completed training as a medical assistant successfully.