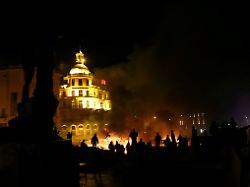 The Lebanese people have been taking to the streets against the government's corruption and mismanagement for several days. In Beirut there are riots during the protests. Dozens of people are injured.
The Lebanese capital Beirut has seen violent confrontations between security forces and demonstrators for the second consecutive evening. Near the parliament building, demonstrators threw water bottles and firecrackers at the security forces, who replied with tear gas and water cannons. Dozens of people were injured, and several people had been injured the night before. The Lebanese civil defense said it brought 36 people to the hospital and treated 54 others on site. The Lebanese Red Cross, for its part, said it had transported 15 injured to the hospital and provided first aid to 37 other people on site. There were also injuries in the ranks of the security forces. They said about 20 of their members had been hospitalized, and thousands of demonstrators gathered in the city center on Sunday evening. The protests took place in advance of parliamentary deliberations beginning on Monday on the replacement of the Prime Minister's post. The demonstrators reject a possible new appointment of the former Prime Minister Saad Hariri. They have called for a cabinet of independent experts, and protests have been taking place in Lebanon since October against the political class, which protesters believe is responsible for widespread corruption and mismanagement. Hariri resigned under pressure from the protests on October 29, but is still managing director. Negotiations to form a new cabinet are dragging on as the economic and financial situation continues to deteriorate.