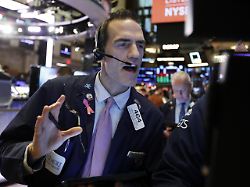 Many investors want to cash in before New Year's Eve: Not only in Germany, but also in the USA, they use the annual financial statements to clear out their custody accounts and send the Dow Jones into the loss zone. Only a Chinese Tesla rival defies the sales orgy – huge.
On the penultimate day of the decade, investors in the United States took profits. The Dow Jones index of standard values ​​fell 0.6 percent to 28,462 points in New York. This means that the annual balance for the leading US index is still around 22 percent. The broader S&P 500 decreased by 0.6 percent to 3,221 points. The technology-heavy Nasdaq selection index 100 was 0.7 percent lower at 8709 points. All three indices had reached record levels on Friday. Even greater losses were prevented by a report that Chinese Vice Prime Minister Liu He plans to travel to the US later this week to sign a trade agreement with the US. "Washington sent an invitation and Beijing accepted it," the South China Morning Post report said. Both sides had recently agreed on a first partial agreement to settle the trade conflict that had been going on for almost a year and a half, but most dealers are on vacation and sales are low. "Many are not there, there is not much going on – some movements are exaggerated," says Robert Pavlik, chief strategist at the wealth management company Slatestone Wealth. Tesla rivals depend on everyone the height. The Chinese electric car manufacturer is currently benefiting from the strong demand for its vehicles and has generated more sales than expected. The German stock market grew faster in 2019 than in seven years. The Dax went out of trading at 13,249.01 points – an increase of 26.3 percent within a year. "At the end of the year, investors can let the champagne corks pop and celebrate the last trading day of the year," said Timo Emden from the analysis firm Emden Research. Over the past decade, the increase was a good 122 percent, but investors used the last trading day of the year to cash in. The Dax dropped 0.7 percent. On the shortened day of trading, sales were low, many investors stayed at home between the holidays, and oil and gold are growing moderately. This means that the quotes hardly show any reaction to the latest developments in Iraq and Syria. After the death of a U.S. civilian in a missile attack on a military base in Iraq, the U.S. Army bombed bases of Hezbollah brigades supported by Iran in Iraq and Syria. The prices are still close to their three-month high from last Friday. Falling US oil inventories from the previous week will continue to support the trend, it is said. The price of a barrel of the US grade WTI rises by 0.2 percent to $ 61.84, for Brent it goes up by 0.7 percent to $ 68.62 and the price of gold increases by 0.3 percent to 1,516 Dollar. Support for the precious metal comes from the weaker dollar, which makes gold cheaper for buyers from other currency areas.