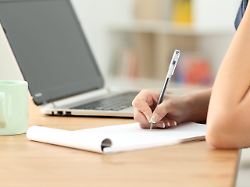 Write your own book? For many a long-cherished dream. If the research costs money, it can even reduce the tax burden. But the tax office is looking closely at whether the book should generate profits.
Writers should be able to demonstrate that they want to make a profit with their book. At least if you want to deduct research costs from tax. A decision by the Rhineland-Palatinate Tax Court is particularly important for people who write for personal reasons and not as their main work. "Research expenditure is only recognized for income tax purposes if the intent and prospect of success is from the start to market the result of the writing profession profitably." This is the explanation given by Isabel Klocke from the taxpayers' association with a view to the ruling. Research into the father's life In the event of a dispute, the son worked on a biography of his father's life and work. Before and after the Second World War, he worked as an actor, director and film editor. The son claimed the research costs of around 20,000 euros as a loss in his income tax return, but the tax office did not recognize the expenses. In the opinion of the tax officials, the book concept was neither convincing nor could an intention to make a profit be determined. This view was confirmed by the Rhineland-Palatinate Finance Court (file number: 3 K 2083/18), and writers, like artists, were often only expected to make profits after a long start-up period. However, losses are not recognized under tax law if it is clearly established that the taxpayer is not willing or able to generate profits. "To do this, the marketing concept should be well planned and the individual steps documented," advises Klocke. This is especially true if it is your own biography or that of a relative. Because then a private interest in the research is often suspected.