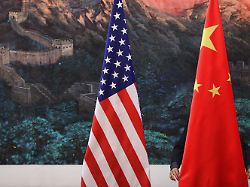 The trade dispute between the US and China has been going on for almost a year and a half. In the global financial markets, therefore, investors listen carefully when Washington or Beijing comment. This time, China is on the train.
China makes the settlement of the trade dispute with the US dependent on the withdrawal of tariffs. "Sources that have insight into the negotiations told the Global Times that the US must repeal existing tariffs, not planned ones," the paper said. The "Global Times" appears under the auspices of "Renmin Ribao," the organ of the Chinese Communist Party. The report cites another informant, according to which the US rejects a waiver of tariffs so far, because this is their only weapon in the trade conflict. The United States would "surrender" if they did.When is there an agreement? Last Tuesday, US President Donald Trump said that work on a deal to defuse the 16-month trade dispute was in the final stages. A few days earlier, China's President Xi Jinping had expressed his desire to end the conflict. However, trade experts in the US and Circuit Governments in Washington last month had expressed the expectation that there would be no agreement before the beginning of the new year. US Senate Finance Committee Chairman Chuck Grasley said Tuesday that the US Trade Commissioner Robert Lighthizer and US Treasury Secretary Steven Mnuchin were invited to Beijing for personal talks. According to Grassley, both politicians are ready for the trip if there is a "real chance" for the conclusion of a contract. The two largest economies in the world have been covering each other for over a year with special bills worth billions. The dispute slows down the growth of the global economy and hits mainly export-exporting nations. In the past few days, more uncertainty has surfaced again, whether it comes to the conclusion of a first agreement.