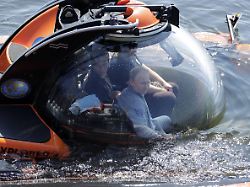 The Russians are upgrading their underwater fleet, and that worries NATO. Moscow's submarines have made tremendous technological advances. They are difficult to track down and can cut internet cables. The alliance wants to arm itself for a possible war on the seabed.
Russian underwater military maneuvers alert NATO. The alliance is reporting most of the activities of Russian submarines since the end of the Cold War this year, the editorial network Germany writes, referring to official information from NATO headquarters in Brussels. Russia is continuously strengthening its underwater operations, NATO spokeswoman Oana Lungescu told the RND. In an operation around Norway in October alone, the western alliance observed up to ten Russian submarines at the same time. NATO announced a response, according to the report. Among other things, the western alliance is planning more patrols in the North Atlantic. In addition, they will invest in modern anti-submarine combat from the air. The spokeswoman for the RND emphasized that the North Atlantic was "of vital importance for the security of Europe" with regard to military supply routes, civilian trade routes and communication channels. Their submarines have become much quieter, and Russia's rockets are also much faster than before. Russia is currently testing a hard-to-find upgrade of the Borei-class submarines. These ships are expected to receive zircon-type supersonic rockets in the course of 2020. NATO is not sure whether current Western interception systems can stop it, NATO also deals with scenarios that Russian submarines could cut the submarine cables between the United States and Europe. Because most of the Internet communication flows through these cables, attacks of this kind could be part of hybrid warfare. This is how the military describes a mixture of open and covert acts of war. According to the RND report, "Seabed Warfare" is considered a major future topic for the Western Alliance.